It seems as though every day Trump and his flunkies are trying to take back any progress we’ve made in the last 8 years. Him and the GOP are a joke…OH LOOK! Here’s another thing Trump is trying to take away from us
Sean Spicer was asked about the Trump Administration and weed, here’s what he had to say:
“There’s two distinct issues here: medical marijuana and recreational marijuana. I think medical marijuana, I’ve said before, that the president understands the pain and suffering that many people go through, who are facing especially terminal diseases, and the comfort that some of these drugs, including medical marijuana, can bring to them. And that’s one that Congress, through a rider in [2014], put an appropriations bill saying that the Department of Justice wouldn’t be funded to go after those folks.
There’s a big difference between that and recreational marijuana. And I think that when you see something like the opioid addiction crisis blossoming in so many states around this c..

WASHINGTON — President Donald Trump’s administration said on Thursday for the first time that it will crack down on marijuana sales in states that have approved recreational pot use.
White House press secretary Sean Spicer said the Department of Justice will pursue enforcement of federal law against recreational use, but not medical use. The statement marked a major break with the Obama administration’s hands-off approach to the growing marijuana legalization movement.
“I do believe that you’ll see greater enforcement,” Spicer told reporters at his daily briefing. “Because again there’s a big difference between the medical use that’s very different than the recreational use, which is something the Department of Justice will be further looking into.”
The decision is certain to provoke a fight with the states that have legalized recreational marijuana. Those states are Alaska, California, Colorado, Massachusetts, Maine, Nevada, Oregon and Washington and the District of Columbia.
Jay .. Local marijuana shops say they will take a wait-and-see approach after White House Press Secretary Sean Spicer recently made allusions to a federal crackdown on legal pot.
Ramsey Hamide, whose co-owned dispensary Main Street Marijuana is Washington’s top seller of marijuana, said cannabis-based businesses are worried they could face fines or jail time, but for many it’s too soon to say.
“We’re not going to do anything reactionary,” he said, later adding that he and his business partners would take it “one day at a time.”
Spicer said Thursday the administration may consider cracking down on the recreational marijuana industry now legal in eight states and Washington, D.C.
“I do believe that you’ll see greater enforcement,” Spicer said during a press briefing. He also made the distinction between recreational and medical marijuana, which he said were “very, very different” subjects.
Spicer then referred follow-up questions to the Department of Justice, now headed by Attorney General.. 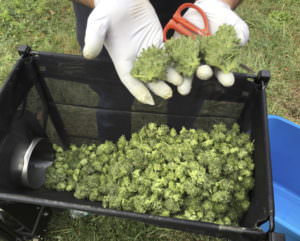 The cannabis industry was rattled Thursday after White House Press Secretary Sean Spicer said he expects the Department of Justice to increase enforcement of federal laws prohibiting recreational pot, even in states where it’s already legal.
Along with the District of Columbia, eight states have legalized recreational use among adults, including California, Maine, Massachusetts, and Nevada just this past November. That means one in five American adults can smoke, vape, drink, or eat cannabis as they please under state law.
Meanwhile, over half of the nation’s states have legalized medical marijuana despite federal laws prohibiting its sale. The industry is estimated to be worth north of $6 billion and will hit $50 billion by 2026, according to Cowen & Co.
“Today’s news coming out of the administration regarding the adult use of cannabis is, of course, disappointing,” Derek Peterson, CEO of marijuana cultivator Terra Tech Corp., said Thursday in a statement. “We have hoped and still ..

THE HAGUE, Netherlands — Dutch lawmakers on Tuesday voted in favor of tolerating the cultivation of cannabis, a move that could bring to an end a key paradox of the relaxed Dutch policy on marijuana and hashish.
Buying small amounts of pot at so-called coffee shops has long been tolerated in the Netherlands, but cultivating and selling the drug to the coffee shops themselves has remained illegal.
That hasn’t stopped coffee shops flourishing since liberalization of drug laws in the 1970s, and becoming a major tourist draw card, particularly in Amsterdam, where tourists often visit the cafes to light up a joint.
A narrow majority in the lower house of the Dutch Parliament voted in favor of the new law that would extend tolerance to growers as well as smokers. However, the bill still has to be approved in the upper house, known as the First Chamber, where it is not clear if it can find a majority.
If the votes in the upper house go along the same party lines as in the lower house, the.. When recreational marijuana arrived in Washington, prices were still inflated by the black market. A gram of flower in 2014 could sell for $40.
“Those days are gone,” said Jim Mullen, co-owner of a trio of Clark County marijuana stores called The Herbery.
An average gram sells for $8.08 in Washington, according to the state Liquor and Cannabis Board. An agency spokesman said the price has dropped every month after its initial spike.
“It’s simple economics,” Mullen said. “It’s a business, just like anything else. It’s marijuana instead of widgets, you know?”
Competition from more retailers and growers is driving down the price of marijuana flower — the industry’s most sold product. Some predict revenues could plateau soon and local businesses are searching for ways to keep moving forward.
Customer loyalty Mullen’s strategy for his Vancouver-based dispensaries is simple: Keep the customers happy.
“Our sales, I think, are going to increase because of great customer service, great pr..