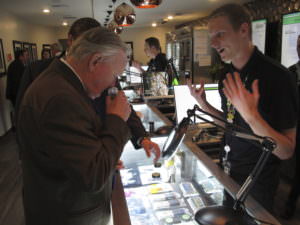 CARSON CITY, Nev. — Nevada’s marijuana regulators are working furiously to launch recreational sales on July 1, a fast-approaching deadline that could hinge on a court deciding whether the powerful liquor industry should be guaranteed a piece of the pot pie before tourists and residents can light up.
Lawyers for the liquor industry, marijuana retailers and the state are facing a judge Monday to argue whether Nevada has the authority to issue marijuana distribution licenses to anyone besides alcohol distributors.
The state says it has the power to temporarily license some existing medical marijuana cultivators and retailers to serve as their own middlemen. It wants to get a head-start on collecting millions of dollars in tax revenue devoted to education before permanent rules are required by Jan. 1, 2018.
The liquor lobby sued, saying the state didn’t give it the first shot at distribution licenses as called for in the ballot measure approved by voters in November, the only legal pot..

It’s been three years since Clark County’s first cannabis businesses appeared, and this corner of Southwest Washington has grown into the fifth largest cannabis market in the state, according to sales and excise taxes collected. What started out as a chaotic industry with major supply-side issues has dramatically changed and matured into a both a revenue generator and a job creator for the region.
“Locally Clark County stacks up quite well (in the Washington cannabis market),” said Gareth Kautz, co-owner of the High End Market Place dispensary in Uptown Village. “We have some of the best weed in the state, some of the best low-cost product in the state and one of the best medical processors (Fairwinds Manufacturing) — if not the only one — in the state.”
Clark County today has 23 growers and processors and 13 stores clustered in Vancouver and Battle Ground, the only two jurisdictions that allow cannabis businesses. Those operations employ 250 or more, although there is no formal tall..