JUNEAU, Alaska — Governors in at least two states that have legalized recreational marijuana are pushing back against the Trump administration and defending their efforts to regulate the industry.
Alaska Gov. Bill Walker, a one-time Republican no longer affiliated with a party, sent a letter to U.S. Attorney General Jeff Sessions this week asking the Department of Justice to maintain the Obama administration’s more hands-off enforcement approach to states that have legalized the drug still banned at the federal level.
It comes after Sessions sent responses recently to the governors of Alaska, Colorado, Oregon and Washington, who asked him to allow the pot experiments to continue in the first four states to legalize recreational marijuana. Sessions detailed concerns he had with how effective state regulatory efforts have been or will be.
Washington state also responded to Sessions this week. Gov. Jay Inslee said the attorney general made claims about the situation in Washington that .. NEWPORT, Ore. — Eddie Biggar sports a black-and-green suit dotted with tiny green leaves as he dances jovially on a corner of the Pacific Coast Highway.
Some two-and-a-half hours southwest of Portland, he owns the sidewalk. Just like a sign-waiver might promote the local pizzeria, The Weedman boasts $5 grams, urging customers down the street to CannaMedicine.
The state has licensed pot dealers in every Oregon county bordering the Pacific Ocean, with the highest number near the beach here in Lincoln County, state data show. But there’s little so far to suggest marijuana is changing the coastal economy, which is already largely fueled by tourism.
Still, there’s no question many out-of-towners are heading into coastal pot shops. Retailers say they’ve seen people from China, Mexico, the Dominican Republic and South Korea.
“I’ve never seen so many different IDs in my life,” Shane Ramos-Harrington said in Touch of Aloha, his Hawaii-themed marijuana outpost in the area of Depoe Bay, a com.. 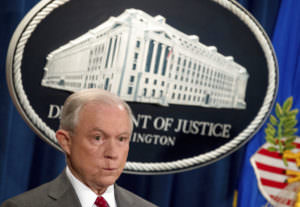 WASHINGTON — Attorney General Jeff Sessions has warned of a crackdown on marijuana. But documents obtained by The Associated Press show he’s getting no fresh avenues from a special task force formed to find the best strategy.
Instead, the Trump administration task force is offering familiar suggestions to Sessions. Those include continuing to review whether to change or rescind the more hands-off policies of the Obama era, which allowed the nation’s legal pot industry to flourish.
Advocates and some members of Congress had long feared the recommendations would give Sessions a green light to try to take down the multimillion-dollar industry.
Sessions has compared marijuana to heroin and blamed its legalization for violence.
He is not bound by the task force recommendations, but any federal crackdown would be difficult politically and practically. LOS ANGELES — Billions of dollars are expected to flow through California’s legitimate marijuana industry next year when recreational pot becomes legal, but most of those businesses won’t be able to use banks.
The reason: Many banks don’t want anything to do with pot money for fear it could expose them to legal trouble from the federal government, which still lists marijuana as illegal — and regulates the banking industry. There is uncertainty over how the Trump administration will react.
Because of those fears, pot dispensary operators in the 29 states where the drug is legal, either for medical or recreational purposes, often find themselves nervously handling obscene amounts of cash.
During the Obama administration, the Justice Department issued guidelines to help banks avoid federal prosecution when dealing with pot businesses in states where the drug is legal.
But most banks don’t see those rules as a shield against charges that could include aiding drug trafficking. And they .. SEATTLE — Washington Attorney General Bob Ferguson says he’s disappointed with a letter from U.S. Attorney General Jeff Sessions about the state’s efforts to regulate marijuana.
In a letter dated July 24 , Sessions pointed out to Ferguson and Gov. Jay Inslee that a 2013 Justice Department memo which was interpreted as clearing the way for states to regulate marijuana did not preclude federal prosecution. Sessions also highlighted a 2016 report from a federally funded drug enforcement organization that raised questions about how effectively the state is controlling the industry.
Sessions asked Ferguson and Inslee to provide information about how they’re addressing the issues raised in the report.
In a written statement Friday, Ferguson said the U.S. attorney general’s letter relies on “incomplete, inaccurate and out-of-date information” about Washington’s marijuana regulations. He added that “any action from the Department of Justice short of allowing our well-regulated, voter-approv.. The most rigorous study yet of the effects of marijuana legalization has identified a disturbing result: College students with access to recreational cannabis on average earn worse grades and fail classes at a higher rate.
Economists Olivier Marie and Ulf Zolitz took advantage of a decision by Maastricht, a city in the Netherlands, to change the rules for “cannabis cafes,” which legally sell recreational marijuana. Because Maastricht is very close to the border of multiple European countries, drug tourism was posing difficulties for the city. To address this, the city barred noncitizens of the Netherlands from buying from the cafes.
This policy change created an intriguing natural experiment at Maastricht University, because students there from neighboring countries suddenly were unable to access legal pot, while students from the Netherlands continued.
The research on more than 4,000 students, published in the Review of Economic Studies, found that those who lost access to legal ma..